The movers have left you in a new apartment filled with boxes. Unpacking and organizing can wait until tomorrow; you’ve earned yourself a long, hot, relaxing shower. However, as the steam builds in your soapy paradise and your muscles start to relax, you panic as you hear the smoke detector blaring.

Steam can set off a smoke detector. Water droplets from the steam act like smoke particles, triggering the alarm in both photoelectric and ionization smoke detectors. Relative humidity above 85 percent can also set off some smoke detectors.

To understand how and why smoke detectors can generate panic-inducing false alarms like those caused by steam, let’s take a few moments to understand how they work. In doing so, we might even discover a few ways to help you shower in peace. Let’s get started!

Photoelectric or optical sensors are best for detecting smoldering fires, while ionization sensors excel at sensing flaming fires. Safety experts typically advise homeowners to protect their houses with both types of smoke detectors.

Let’s have a look at each type:

Photoelectric smoke detectors are also known as optical smoke detectors. They contain a light source that emits visible, infrared, or ultraviolet light. The light faces away from the unit’s sensor. When smoke particles obstruct this light, it bounces inside the unit, hitting the sensor and setting off the alarm.

Ionization smoke detectors contain two electrically charged plates with a small amount of radioactive material between them. One of the charged plates contains a positive charge and the other a negative charge.

The radioactive material sheds particles and photons, which remove electrons from air molecules. This creates positive ions. The freed electrons attach themselves to neutrally charged air molecules, creating negative ions. These ions get attracted to the charged plates setting up a small, steady current.

When smoke particles enter the unit’s chamber, they disturb this current, setting off the alarm.

Some smoke detector manufacturers offer devices that combine smoke detecting sensors and carbon monoxide sensors. These are sold under a variety of names. It is best to read the packaging information carefully to determine which type of sensors each model contains.

The kitchen, living room, and bedrooms are where fires typically start in most homes. That said,  do not neglect other areas that may contain large appliances.

Now that we understand the types of smoke detectors and how they do their job, we can better come to grips with how they can be accidentally activated by steam, dust, and spiders.

Dual sensor smoke detectors are an inexpensive and effective way to be alerted to the presence of smoldering or flaming fires. In many cases, the smoke detector’s sensors will set off an alarm before you can even smell the smoke.

Smoke detector false alarms can be caused by various factors. These include:

As mentioned earlier, the water droplets within steam can mimic the behavior of smoke particles close enough to set off your smoke detector. Photoelectric sensors tend to detect steam as smoke more often than ionization sensors. However, ionization sensors are often more prone to set off an alarm during periods of high humidity.

Dirt and dust can disrupt the light in a photoelectric sensor and disturb the current within an ionization sensor. As we have learned, either of these will cause your smoke detector’s alarm to go off. Wiping down the outside of the smoke detector twice a year should minimize the chance of false alarms occuring. If you notice a few cobwebs near your smoke detector, you might want to take care of those as well.

Cobwebs indicate the presence of spiders. They are usually abandoned spider webs. Small spiders and other small insects are a common cause of mysterious smoke detector false alarms. When they crawl or fly into the unit, they disrupt photoelectric and ionization sensors.

You might have to unscrew the detector and shake it gently a few times to encourage the unwelcome visitor to leave.

Maybe you’re the type of person whose smoke detectors will never encounter significant dust and dirt. Also, cobwebs wouldn’t dare appear on the ceiling because you clean so often and so well that spiders tell their children horror stories about you when they want to frighten them. So, are you safe from smoke detector false alarms?

Deep cleaning often involves using strong chemicals and volatile oils, which can disturb smoke detector sensors if used too close to the unit. Fortunately, you can solve this problem by opening your windows frequently.

Opening the windows on a warm spring day can refresh your living space and boost your spirits. However, if one of your smoke detectors is located too close to the window, it may mistake pollen and other particles contained in those gentle breezes for smoke.

Closing the window nearest the sensitive smoke detector and opening one a little further away is the easiest solution to this false alarm triggering situation.

A smoke detector that persistently chirps is trying to get your attention. This is usually not a false alarm but an indication that the battery needs changing. Unless your smoke detector has a lifelong battery which is good for ten years, the batteries need to be changed about once a year.

If you’ve installed a fresh battery and the unit continues to chirp, your smoke detector may need a replacement. All smoke detectors over ten years old should be replaced.

The Worst Way to Deal With False Smoke Detector Alarms

It can be annoying when a smoke detector starts blaring for apparently no good reason. After reading the above list of what can cause your smoke detectors to issue a false alarm, you might be tempted to unscrew them all to guarantee you unlimited peace and quiet. That would be an overreaction.

Unlike earlier models, modern smoke detectors are designed to limit false alarms, but they sometimes still happen. In frustration and anger, some people will unscrew the offending device and let it hang as a non-functioning but quiet decoration. This is absolutely the worst way to deal with a malfunctioning smoke detector. Replacing the detector is a much better option.

According to the National Fire Protection Association, approximately 60% of fire deaths happen in homes with no smoke detectors or non-functioning ones. Your safety and the safety of your family and friends is surely worth much more than the cost of replacing the offending smoke detector.

Although the first smoke detectors were invented in the 1930s, they did not become common in most homes until the 1970s. It is impossible to determine how many lives these small devices have saved since then.

That said, we do know that the death rate in house fires with non-functioning or nonexistent smoke alarms is about twice as high as that in homes with working smoke detectors. Without doubt, few false alarms are a small price to pay for this kind of protection. 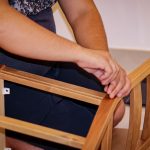 How to Make Your Chairs Taller: 9 Easy DIY Methods