When you want to seriously clean a room, it’s a good idea to use some bleach. The cleaning power of bleach cannot be denied but it’s also very potent. If you have just finished cleaning your house with bleach, then you might be noticing that the bleach smell is sticking around. This can be very tough to deal with and you don’t want to have to keep smelling the bleach just because you needed to clean.

Thankfully, it’s possible to get rid of the bleach smell as long as you take the right steps. Just read through all of the information and you should be able to neutralize the smell without it being too big of a deal.

Be Careful With Bleach

It’s important to know that you need to be careful what you’re mixing with bleach. Bleach can potentially create noxious fumes when it has been mixed with other cleaners. Even adding a little bit of white vinegar to bleach can create an odor that will be far worse than the bleach smell that you’re dealing with. Knowing this, it’s important to use methods to get rid of bleach smells that don’t involve vinegar when possible.

I’m going to go over some ways that you can use vinegar to help out later but you have to be very careful. For now, it’s going to be best to focus on some practical ways to get rid of the bleach smell. As long as you understand the need to be as safe as possible when dealing with bleach, you should be fine. Just don’t mix bleach with other cleaners or substances to be on the safe side.

Ways to Get Rid of Bleach Smell in Your House

Open the Windows to Air Things Out

One of the first things that you should do to get rid of that bleach smell is to ventilate your house properly. If the bleach smell doesn’t have anywhere to go, then you shouldn’t expect it to go away. You need to be able to open up the windows in the room with the bleach smell problem. Doing this should allow you to use the power of airflow to dissipate the smell of bleach.

Just be smart with the way that you’re positioning the fans. You can use multiple fans in order to create the best airflow effect. For example, you could position one fan in the hall to push good air into the room with the bleach smell. Other fans can be positioned to push air out of the windows in order to get rid of the bleach smell.

Another practical way to eliminate a strong bleach smell in a room is to use baking soda. If you have baking soda sitting around your house somewhere, then you probably already know that it’s capable of absorbing odors. You can make use of baking soda in order to absorb the bleach odor that has become a problem for you. The easiest way to do this is likely to place baking soda in a bowl or on a plate and then just put it somewhere in the room.

Over time, the baking soda is going to be able to absorb the odor of the bleach. This method isn’t going to work instantaneously but it will yield results. Give this a shot if your ventilation efforts are not working as well as you had hoped. This is also great for rooms that don’t have as many windows or other practical ways that they can be ventilated.

Put a Bowl of Vinegar in the Room

As mentioned earlier, vinegar and bleach can combine to create a toxic type of gas. This is not good and you want to be very careful when using vinegar around bleach. That being said, you can use vinegar in a safe way to help get rid of bleach smells in a room. The easiest way to do this is to put a bowl of vinegar in the room that smells of bleach and then close the door.

If you let the bowl of vinegar sit there overnight, then it will wind up getting rid of the smell of bleach. This actually works pretty well but the room might have a vinegar smell instead. You can also boil a small pan of vinegar in order to get rid of stubborn odors that are impacting the entire house. As long as you’re careful while using vinegar, it should help to finish off your bleach smell problems. 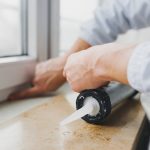 What Happens if Caulk Gets Wet Before It Cures? 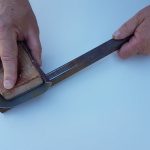 Will Keeping Lights On Keep Roaches Away?