Every day, on average, fire departments in the U.S. deal with 340 gas leaks. Movies also show how easy it is to blow up propane tanks. So you wonder whether you should worry about the one in your house exploding or if you left it inside your car on a hot summer afternoon?

According to the Propane Education & Research Council (PERC), storing propane tanks below 120°F (48.88°C) is safe. Above this temperature, there’s the risk of leaks and boiling liquid expanding vapor explosion (BLEVE), which can cause an explosion.

In this article, you’ll learn more about a propane tank’s hazards. I will highlight various factors that may increase the risk of an explosion and also cover how you can store a propane tank safely.

At What Temperature Can a Propane Tank Explode?

Is there really a danger of your propane tank exploding? Although the answer is yes, you need to consider several factors needed for this to become a reality. Also, this isn’t something that happens out of the blue.

Thankfully, the Propane Education & Research Council (PERC) has an answer to this question. They provide safety and training programs on propane use. According to PERC, there won’t be any risk of explosion as long as the temperature doesn’t exceed 120°F.

You may also like to read: Can Propane Tanks Freeze and Explode?

When Will Propane Tanks Explode?

It’s a good thing movies exaggerate reality. If propane tanks exploded as frequently and easily as they did in Hollywood, it would never be safe to use them.

Now propane tanks don’t just explode out of the blue, even though propane is flammable (in its vapor state).

Below are two reasons explaining when propane tanks explode.

Due to the hazardous nature of propane, manufacturers have taken great lengths to reduce the risk of explosions as much as possible. One way to decrease this risk is by preventing the build-up of pressure inside the propane tank.

Propane, which has a boiling point of -44°F (-42°C), is stored in its liquid form. This not only makes it easy for transportation, but it also vaporizes within the container. As a result, you can light a fire easily because propane is flammable in this state.

When the tank gets hot, there is an increase in the energy of the propane molecules. As the temperature increases, the pressure within the container starts to build up. Now, if there is no way for the gas to escape from the tank, it can be dangerous.

Why? As the pressure keeps increasing, it will reach a point where the container can no longer keep the vapors inside. This will result in the tank exploding.

To prevent this problem, your propane tank comes with a pressure relief valve. This safety mechanism releases propane to the surroundings to avoid the build-up of pressure inside the container.

Let’s assume that a propane tank is inside a car, parked directly under the sun. If left for a long time during summer, the pressure inside the tank increases, and the safety valve releases the excess vapors. In this case, a fire or spark can result in an explosion.

Fortunately, detecting gas leaks in a propane tank is easy. For instance, if you note the smell of rotting eggs, this is a sign that you need to look at the container. You can also apply soapy water to areas where you suspect a leak. If bubbles form, you should leave the premises and contact emergency services immediately.

BLEVE can cause considerable damage as it is a dangerous phenomenon. Under normal circumstances, your propane tank will contain propane in its liquid and vapor form.

Let’s assume that pressure starts to build up because of heat and the pressure relief valve is faulty. With a faulty safety mechanism the pressure will keep increasing. Suddenly, the container gets torn apart as it can no longer keep the propane inside.

When the container ruptures, there is nothing to prevent the liquid propane from escaping. In this situation, liquid propane is at a high temperature due to the heat. Also, the pressure drops rapidly, as the tank is now non-existent.

Because of this sudden change in pressure, liquid propane will start to boil. At the same time, the vapors will also expand pretty quickly.

Now, let’s go back to the heat source, which in this case, is fire. If a fire is present during this situation, it can lead to a massive explosion.

How to Store Propane Tanks Safely

Luckily, you can avoid these dangerous situations if you properly store the propane tank. Also, you should get it inspected regularly so that a certified professional can rectify any issues.

Propane tanks can withstand temperatures up to 120°F. Beyond this temperature, the risk of an explosion goes up significantly.

Most propane tank explosions are due to gas leaks and BLEVE. However, you don’t have to worry about using propane tanks if you ensure no heat source is close to them.

Avoid storing your propane tank in an enclosed place. If possible, keep it outdoors, under plenty of shade. 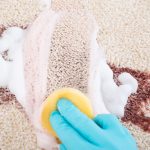 I Ran Out of Carpet Cleaner: What Can I Use Instead? 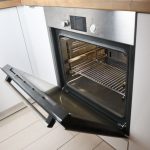 How to Get Rid of Self-Cleaning Oven Fumes