Since early human history, systems for draining and transporting water in homes have been a staple. However, as time passes and technology grow, there now exists a variety of options for water supply pipes.

Copper and plastic are the most common type of pipes used for water supply. Other plumbing pipes include galvanized steel, cast iron, PVC, ABS, CPVC, and HDPE. Choosing a suitable pipe for you comes down to price, space, and application.

The rest of this article will explore the nature of these plumping pipes in greater detail and discuss the advantages and disadvantages they come with.

Copper has been used for water supply pipes for a long time because of its durability and anti-microbial properties. Copper is very versatile piping as it comes in various types and sizes.

Ridgid copper (or hard copper) is praised for its longevity and is used primarily throughout a building or home. It is easily cut with a saw or tubing cutter and welded together to increase its length.

Flexible copper (or soft copper) is more malleable, making it easy to bend even without tools. It’s ideal when space is limited, and flexibility is critical. The flexibility means copper can be used for plumping sinks, showers, or even around corners.

Copper pipes are in three different sizes: M, L, and K. These letters indicate varying degrees of thickness of the wall of the pipe. Type M is the thinnest, type K is the thickest, and type L is somewhere between. These pipes are split even further by colors, red, blue, and green (M, L, K), for easy identification.

Each type excels in different roles. Type M and L are ideal for indoor use, but L is better for moving drinking water, while M is used for sewage and drainage. Type K thickness makes it perfect for harsh conditions and, as such, is used for outdoor plumping.

Due to its unique benefits, copper pipes remain a popular option. The material is sturdy, making it resistant to corrosion, leakage, and extreme temperature change, allowing the pipes to last several decades.

Bacteria can’t survive on the surface of copper, making it an ideal choice for moving drinking water. It also can be recycled.

Copper’s main deterrent is its price. As one of the more expensive options, you’ll have to consider your construction budget before you utilize copper pipes for water supply.

Cross-linked polyethylene, commonly known as PEX, is a popular plastic pipe used for homes and businesses. It is a very durable substance, resistant to corrosion and rust, and won’t need to be replaced unless broken.

Flexibility and ease of use are some of its most significant advantages. PEX pipes can easily split corners and weave walls while still withstanding the pressure of the water supply. They fit one another in various ways, extending their range quickly without needing soldering or gluing.

Even though it is a plastic material, PEX pipes are resistant to extreme hot and cold temperatures.

They are typically color-coded for temperature (red for hot and blue for cold), making them easy to organize. It also remains one of the cheapest plumbing options available.

Its biggest downside comes from its restriction to internal use. UV rays are known to have a degradation effect on plastics. If installed outdoors, the pipes won’t last. Some PEX pipes are known to influence the water it transports, changing its smell and taste, so they may not be the best option for moving drinking water.

Polyvinyl chloride pipes, or PVC, are a thermoplastic polymer that combines vinyl and plastic.

Rigid, light, and reasonably durable these plastic pipes are typically used for drainage jobs, such as sinks, toilets, and showers. Like other plastic piping, they don’t rust or corrode.

PVC pipes are easily cut and glued to others for quick connections. The smooth interior lining fights sediment build-up, which helps the pipes resist blockage.

This resistance to blockage and longevity makes PVC a popular option for indoor, outdoor, and underground use.

These pipes’ most significant shortcomings come from their limited size options, inability to handle the heat, and concerns with toxicity. PVC piping is only available in the nominal pipe size (NPS) system. Hot water is known to warp or even melt these pipes.

There are concerns that it can introduce BPA or other polyvinyl chloride chemicals to drinking water.

These chemicals can lead to respiratory and reproductive complications, so PVC pipes are not often used to transport potable (drinking) water. Some states have even banned this type of use.

Chlorinated Polyvinyl Chloride, popularly known as CPVC, can be categorized in the same family as PVC pipes.

CPVC possesses durability and an indefinite lifespan. It keeps its resistance to corrosion and rust, lightweight and moderately flexible.

The most significant difference between CPVC and PVC is that CPVC pipes are chlorinated. The chlorination boosts durability, allowing them to withstand higher temperatures, making it a better option for hot water transport.

CPVC pipes also come in a variety of sizing options. They are available in NPS and CTS or copper tubing size systems, and CTS mimics the sizing rules used in copper pipes.

These pipes are cheaper than metal plumbing, but they still lack versatility. They are known to break down in direct sunlight and are restricted to indoor applications. It’s crucial to know that even though CPVC piping is cheaper than most metal options, it’s still far more expensive than PVC piping.

ABS, or acrylonitrile butadiene styrene piping, is another cousin in the PVC piping family.

ABS piping is less flexible but more durable than PVC and identified by its bold black coloring. The material is used for several applications, including 3D printing and Legos.

Unlike PVC piping, ABS has a high resistance to impact and cold temperatures. Lightweight and easy to install, these pipes are ideal for indoor and underground use.

ABS pipes exhibit similar issues as other plastic-based plumbing. Direct sunlight can distort and ruin them over time, limiting them to underground usage only outdoors. They also contain BPA making them unfit for transporting any drinking water.

High-Density Polybutylene, also known as HDPE piping, is one of the most popular options for underground plumbing lines.

They are praised for their durability, corrosion resistance, and flexibility, which allow them to be installed with fewer connections. Because of these advantages, HDPE pipes have a wide range of applications.

These pipes work well in cold weather, are one of the few non-toxic plastic piping options, and are a good replacement for PVC for buried piping.

While they excel in colder temperatures, they are known to crack in high heat and melt in direct sunlight.

Galvanization is a process of preventing rust in steel by coating it with zinc. The zinc acts as a protective layer that allows the pipes to resist corrosion and rust.

They were Introduced as an alternative to lead piping and saw massive popularity before the 1980s. Galvanized piping is unquestionably strong, their ends are threaded, allowing them to connect.

While they have fallen out of favor by today’s residential building standards, many homes still use this plumbing style. It is common for people to visualize these pipes when they think of basic plumbing. It also is cheaper than copper.

Galvanized piping saw was generally used for waste, vent, and drain piping before falling out of favor. While it still sees some applications today, it has been deemed too problematic for potable water usage. Currently, its primarily used for gas lines due to its strength and durability.

If your home still uses this plumbing system, upgrading your plumbing systems is highly recommended, as this piping has many issues. It has the shortest lifespan amongst its peers, ranging from 20 to 50 years.

While the coating helps it fight rust, it isn’t perfect. Over time, the zinc flakes away, exposing the steel to the atmosphere and leading to rust, compromising the pipes’ strength. Internal rusting may also contaminate the water flowing through these pipes.

Water that has been contaminated by lead is undrinkable. Further degradation of your home piping can lead to structural damage.

Galvanized steel lacks resistance to clogging; it’s prone to internal mineral build-up, which can interrupt the flow of your water supply.

It is important to note that the galvanization becomes compromised when these pipes are damaged. The compromised galvanization means the pipes lose much of their resistance, quickly becoming vulnerable to corrosion.

Galvanized steel is also very heavy, which makes it difficult to work with these pipes.

Cast iron piping gained popularity around the same time as galvanized steel and shared most of its strengths and weaknesses. Cast iron pipes are highly heat resistant, reduce sound and come in various sizes.

Despite its durability, it is still prone to rusting over time. You can replace the rusted parts with plastic plumping instead. Cast iron is typically only seen with sewage and other draining systems today. 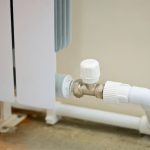 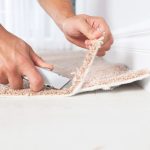 Why Is My Propane Tank Making Noise? – 6 Possible Reasons