Washing machines rust due to the use of corrosive cleaners, corroded metallic foreign objects left in the machine, rusted water pipes, prolonged exposure to moisture, or due to the presence of mechanical faults.

Knowing why a washing machine rusts and what to do about it can help you catch and fix corrosion early on. Read on to learn more.

Signs of Rust in a Washing Machine

Before we discuss what causes rust in a washing machine, let’s talk about some of the signs of rust.

If you have any of these telltale signs of rust in your washing machine, it’s time to inspect it and get it repaired (which we’ll discuss later on in this post).

Some signs of rust in a washing machine include:

Causes of Rust in a Washer

As mentioned at the beginning of this article, metal makes up the majority of a washing machine.

Even though most consist of stainless steel, this metal is still susceptible to corrosion, especially if it’s an older washer — but what’s causing it?

Rust forms when iron is exposed to oxygen and moisture.

Stainless steel consists mainly of iron and carbon, with a chromium layer to make it corrosion-resistant. Unfortunately, the chromium layer is sensitive to corrosive cleaners.

Many of us use bleach in our washers and bleach is a highly corrosive chemical.

With prolonged exposure to bleach, the metal in a washing machine may corrode over time.

Metal objects often end up lost in a washer if left in a pocket during a wash cycle.

These metal objects make their way to the bottom of the machine near the agitator, where they’re easy to miss.

Over time and with exposure to chemical detergents and water, these items begin to corrode, releasing rust throughout the system.

It doesn’t take much—even a tiny paper clip can cause rust stains throughout a washing machine.

In addition, metal items can cause mechanical abrasions to your stainless steel drum’s protective, corrosion-resistant layer. This opens up the door for the formation of rust.

Check for foreign objects by removing the agitator and use a flashlight to inspect the area.

Remove any objects that you come across.

Sometimes, it’s not a foreign object or moisture that’s causing rust in your washing machine—it could be your water pipes.

If you’ve unplugged, inspected, and cleaned the washer yet it continues to leave rust stains on your clothing, the water pipes may be to blame.

Galvanized iron pipes are more susceptible to rust than other pipes. Unfortunately, if rust or corrosion is present in the water pipes, they’ll need to be replaced.

This is usually expensive and requires a plumber.

In some cases, washers may begin to corrode due to manufacturing defects.

For example, many consumers have reported Samsung washer models for rust and corrosion after two years.

It’s believed, but not confirmed, that the drums are off-balance. As a result, it causes excessive vibration on the machine’s spin cycle, leading to water penetrating areas it shouldn’t and causing rust.

Reach out to the manufacturer of your machine if you suspect it’s a defect.

How To Clean a Rusted Washing Machine

Rust stains on the exterior of a washer are typically a cosmetic issue—but they can spread to the interior, so it must be addressed.

Interior stains leach onto clothing and cause unsightly stains within the drum.

If your washing machine contains rust, you’ll need to take time to clean and repair it.

Fortunately, it’s pretty easy to do at home.

To remove rust from the drum or internal components of a washing machine:

Letting them soak in the machine should help dislodge any remaining rust particles.

If the rust is especially bad, opt for a rust remover instead.

Follow the instructions on the product and run an empty cycle through the machine again with the vinegar and lemon juice solution.

Once you’ve cleaned the machine, inspect it again to ensure the rust is eliminated. If rust remains within the drum after using a rust dissolver, it likely needs to be replaced.

Exterior Rust on a Washing Machine

Remove rust on the exterior of the machine using the method below:

After you’ve cleaned and sanded down the area, it will look rather unsightly. Restore the look of your washing machine using the following instructions:

Once you’ve removed the rust from the exterior of the machine, continue monitoring it for additional signs of rust.

Rust is easier to deal with if you catch it early.

Prevent a Washing Machine From Rusting

After removing rust and restoring the look of your washer, you’ll want to prevent future rust.

There are several ways to protect your appliance and extend its life.

The average washing machine should have a life span of eight to twelve years.

These appliances regularly use water and experience frequent exposure to humidity, so rust may be a part of normal wear and tear after a decade or so.

Fortunately, you can keep your washing machine in tip-top shape by using the preventative methods mentioned in this article.

In addition, monitor the system for signs of rust to attack the problem head-on—the earlier, the better.

Will Silicone Stick to Plastic? 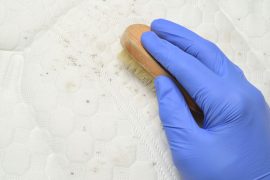 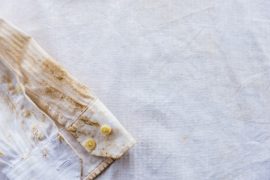 How to Remove Rust Stains From Clothes With Baking Soda

How to Wash Your Shoes in a Sink (Shoe Care)