Like any other item in the house, the toilet will go through some issues from time to time. By far, the most common issue is clogging. We’ve all been there — you start flushing, and all of a sudden there’s a massive water build-up and neither the waste nor the toilet paper are going anywhere.

Obviously, the best course of action is to unclog the toilet as soon as possible. However, a common question is still circulating the online circles about the issue of clogging. Namely, if you were to leave the toilet alone for a certain amount of time, will it eventually unclog itself?

Reasons for Clogging in Toilets

There is more than one reason behind your toilet not flushing the waste down. Sometimes it comes down to the design flaw of the toilet itself, but more often than not it’s the fault of human error. So, let’s quickly go over both options.

When flushing, you should always keep in mind that what goes down the bowl has to be organic. To be more specific, it should be one of these three items:

Both urine and feces will naturally dissolve in water without contaminating the environment and causing any trouble. The same goes for toilet paper — it’s 100% biodegradable material and doesn’t damage the sewage systems or the pipelines. In other words, it is quite literally made for flushing.

Of course, you might also flush some other bodily waste, like menstrual blood and vomit, since they are also biodegradable. Some people, largely in rural areas, also tend to empty their snot into the toilet (and yes, it’s perfectly safe to do it).

However, some items are not flushable for a good reason. Bizarrely, despite the experts warning people about the dangers of flushing various items, some still do it. It’s these items that are most often responsible for clogging.

The list of non-flushable items that people tend to cram down their toilets is huge. And every time someone makes a comprehensive list about it, someone else around the world flushes the next weird item, and it just can’t seem to stop! For instance, a brief list of commonly-flushed debris includes:

Needless to say, never flush any of these down your toilet.

Some old toilets used to have a low flow of water during the flushing, hence the name low-flow or low-flush toilets. They were made with the intention of saving water and helping the environment. And while that is a noble goal indeed, you won’t be saving anything with a backed-up toilet.

Due to their low flow, these products usually don’t have enough water pressure to get the waste out of the P-trap and the drain. As the waste piles up, it will inevitably clog the toilet. And yes, that can happen even with organic flushable material such as feces and toilet paper.

Even if you manage to unclog the toilet, I’d advise buying a high-flow option as soon as possible, or even an up-to-date low-flow model. Of course, you can also try converting an old low-flow variant into a high-flow one, though that might require a bit of effort.

Most plumbing fixtures, like sinks and toilets, use some sort of trap, and more often than not it will be the P-trap. Shaped like the letter ‘P’, this pipe is perfect for flushing, retaining the necessary water, and keeping the sewage smell away.

Various toilet issues tend to be related to the P-trap. For instance, clogging happens often, especially if you flush non-flushable items. However, even excess toilet paper can get stuck in the trap, making water impossible to move.

In addition, if you flush hair frequently, it will get stuck in the trap and slowly leak some of the water away. The trap needs to retain some water for easier flushing and for keeping the sewage smell at bay.

Modern toilets use plumbing vents in order to get fresh air into the system. The air helps the water flow by preventing any air-pressure vacuums from forming.

These vents are usually located at a high spot in the home, and 99% of the time they will be on the roof. And while the roof is the safest location for such a vent, it’s far from foolproof. Leaves and other debris can find their way to these vents and clog them. In addition, birds sometimes make their nests on or around these vents, and the twigs from these nests end up in the vent and prevent the airflow.

What do you do when several different toilets, sinks, and other fixtures regularly clog? You might have clogged one or two with a tissue or a wet wipe, but so many of them clogging at once is hardly your doing.

There will be times when multiple fixtures get clogged at the same time. If that happens, it’s more than likely that you have a main sewer line problem. Maybe it’s burst somewhere, or maybe tree roots ruptured it and caused some blockage. Whatever the case may be, you can’t solve this issue alone — it’s best to call in the experts.

So, Will the Toilet Unclog Itself?

The answer to that question isn’t necessarily easy. The quickest way to summarize it is ‘it might unclog itself, depending on the circumstances.’

For instance, if the debris that causes blockage is organic, i.e. feces and toilet paper, then you might expect the toilet to unclog itself. After all, the debris will dissolve in water over time and the blockage will go away with the next flush. Of course, that’s not always the case; sometimes the paper might pile up to such a point that you will have to unclog the toilet yourself.

Now, if you’ve clogged the toilet with something else (eg. condoms or tampons), you will have to act quickly. Since these are not organic materials, they will not dissolve and the clog will remain there until you remove it.

One good indicator when it comes to ‘self-unclogging’ is looking at the water in the bowl. For example, if some of the water slowly trickles away, that means there’s an opening in the debris and that all you have is a partial blockage. If that happens, just leave the toilet for about an hour, tops, and it should unclog itself.

How to Quickly Unclog the Toilet

When it comes to unclogging, nothing beats the good, old-fashioned plunger. It’s easy to use, inexpensive, and comes in a wide variety of shapes. In fact, nowadays you can even buy a plunger/toilet brush combo at any online or brick-and-mortar retailer.

Check the video below for more information about how to use a plunger.

However, as odd as this might sound, some people don’t always have a plunger ready. And there’s nothing quite as terrifying as having an overflowing toilet and no way to unclog it. So, what do you do then?

I’ve listed all of the organic matter that can go down the toilet with zero issues, like feces, urine, blood, and vomit. However, there’s one more organic substance that can quite literally pass through the pipes at any time — water.

So, how does that help a clogged toilet where no water can pass anyway? Well, all you need to do is use the right type of water. If there’s a clogging problem, simply use a cup to remove all the cold water from the bowl and into a bucket, then pour boiling water down the bowl. Once you do, just wait it out and the waste will dissolve more quickly than in tepid water.

Use Vinegar and Baking Soda

Vinegar and baking soda will do wonders around the house and, more importantly, won’t harm your plumbing system. In order to unclog the toilet, simply pour half a cup of baking soda and a cup of white vinegar in a bowl and mix them with a cup of warm water. The solution should help loosen the waste and remove any blockage.

Use a Toilet Auger

Toilet augers, or toilet snakes, are excellent tools for unclogging all sorts of drains, pipes, etc. They are easy to come by, so make sure to always have one at hand next to your plunger.

As you can see, there are times when a toilet will unclog itself. Needless to say, you have to be careful and act quickly if and when you see clogs happening. However, it’s also important to take good care of your toilet before any clogging occurs. So, in order to keep your porcelain blockage-free, make sure to do the following:

You may also like: Why Does My Toilet Gurgle When Flushed? 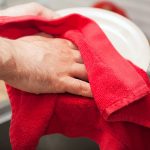 Alternatives to Dish Drying Racks: How to Dry Dishes Without a Dish Rack 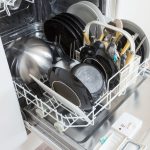 Can You Put Pots and Pans in the Dishwasher? 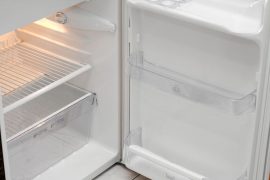 Can You Turn Off a Refrigerator for Long Periods of Time? 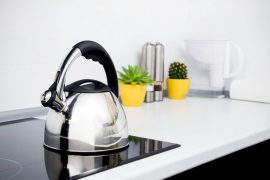 How to Clean a Stainless Steel Kettle (Limescale & Burn Stains) 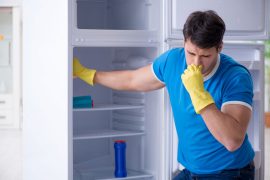 How to Stop Fridge Smelling When Turned Off