Garbage disposal systems are one of the best additions you can make to any kitchen. But even though their purpose is to keep our pipes from getting clogged, blockages still happen from time to time. So what should you do if that comes to pass? Can you put drain cleaner in a garbage disposal?

Ultimately, the answer to that question depends on the ingredients that went into the product in question and the materials your garbage disposal is made of. But if you’re looking for a short answer — yes, you should be able to put drain cleaner in your garbage disposal system. Still, if you want to make sure the drain cleaner you have isn’t the exception to that rule, keep reading.

How Does a Garbage Disposal Work?

The main part of the garbage disposal is attached to the underside of your kitchen sink. So if you end up having to disassemble the system of pipes due to a misplaced heirloom that made it past the blades, that’s where you’ll start. Of course, you’ll first have to deactivate the electric motor that moves the blades to prevent potential injuries.

Ultimately, garbage disposal systems should minimize pipe clogs by breaking down food particles before they reach the drain pipes. That’s what makes it doubly ironic when you still manage to clog the pipes. After all, the device should at least be able to handle the food scraps that remain on your plate after lunch or dinner. So by all accounts, they should work on most kinds of food.

Pieces of fruits and vegetables, as well as soft, cooked meat scraps should clear the blades without an issue. Even then, you’d have to make sure that the things you throw in were in pieces that are small enough for the blades to handle. Moreover, there are still certain kinds of foods and even non-food items that tend to cause blockages.

What Can Clog a Garbage Disposal System?

At this point, you might be wondering if you’re making your garbage disposal chop through things it wasn’t designed to break down. So let’s talk about how your system might get clogged.

For one, you shouldn’t be throwing fibrous vegetables like celery, onion skin, and corn husks into your garbage disposal. No matter how small the pieces you toss in are, the structure of these veggies would make them tangle in the blades. Other items you shouldn’t be tossing down the drain include:

But really, even the approved kinds of food items can build up in your pipes if you’re not using the garbage disposal correctly. Namely, garbage disposal systems shouldn’t operate without any lubrication. So make sure to keep the water running while the blades are shredding your leftovers.

Lastly, while many of these items don’t belong in the garbage disposal system, you could always compost them. That way, your waste can breathe new life into the surrounding plants by enriching the soil they grow from.

Can the Ingredients in Commercial Drain Cleaners Damage Your Garbage Disposal System?

Now that you know about how blockages form despite the presence of a garbage disposal system, let’s see how you might clear them. As we have established, most kinds of drain cleaners should be able to help you dissolve obstructions in the pipes. However, there’s still a question of the ingredients that go into different drain cleaners that are available on the market.

After all, if certain ingredients in the products you’re using can damage the structure of your pipes, the answer to the question we posed is a decided no. So let’s start by examining the ingredients that go into most drain cleaners on the market.

What Is Drain Cleaner? The Ingredient Breakdown

Drain cleaners are usually liquid chemical products that are made to clear any pipe obstructions that might occur. These products usually have a liquid base made of plain old water. As you already know, keeping the tap open while the garbage disposal is running is something most manufacturers recommend.

That also means that the liquid base of most drain cleaners won’t be dangerous for your system. In fact, according to some sources, the only way to really damage your garbage disposal is to pour in abrasive substances. That’s why you should probably avoid using products like Drano Kitchen Crystals.

The rest of the company’s lineup should be safe enough for your pipes. But even so, you might want to be careful. The main active ingredient in those kinds of drain cleaners is sodium hydroxide aka lye. While the chemical won’t harm your pipes, it can cause serious burns on your skin.

Additionally, since the chemical compound releases heat when it touches water, it might react poorly to any other chemicals you decide to use. Just in case, you might want to avoid adding bleach or ammonia into the mix. And, of course, you’ll want to wear rubber gloves while applying the cleaner.

Alternatively, you can use one of the many commercial drain cleaners that don’t contain sodium hydroxide or bleach. The only downside is that the products with more natural ingredients might take a while to work. Still, if you give it enough time, something like the Green Gobbler Drain Clog Dissolver should be able to liquefy hair or any similarly stubborn clogs.

Another option is the Rejuvenate Disposer & Pipe Cleaner. The product comes in powder form, indicating that its main ingredient is, indeed, sodium bicarbonate — or baking soda. On the other hand, you can also make your own drain cleaner.

How to Clear a Clogged Garbage Disposal the Right Way

Now that you know the risks of choosing the wrong drain cleaner, let’s go over how to get rid of any blockage in your garbage disposal system.

The first thing you’ll need to do is unplug the garbage disposal system. You don’t want to risk it turning on while you’re fiddling with the pipes.

Next, you might want to get under the sink and put a clamp over the rubber part of the drain line that goes to your dishwasher. As you know, these two systems are connected. Therefore, doing this should prevent the mess from the garbage disposal from ending up in your dishwasher.

Finally, it’s time to clear the obstruction in the garbage disposal. As luck would have it, there are several ways to go about doing that:

If you’re still not sure how safe the commercial drain cleaners are, you can always make your own. Just mix a quarter-cup of baking soda with half a cup of vinegar and the blockage will be a thing of the past. You can even swap out the vinegar with bleach!

Still, the best way to keep your garbage disposal system from clogging is to use it according to the manufacturer’s instructions. 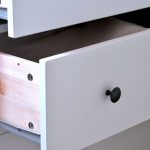 Do You Have to Paint the Inside of Drawers?

How Much Weight Can a Screw Hold?