Garbage disposals are electronic devices that make our lives incredibly easier. The speed and efficiency with which they allow us to dispose of food waste are truly unmatched.

Seeing how important and valuable the disposal is, it’s necessary to take as much care of it as possible. Being mindful about what we put in it is essential because certain items can cause it to malfunction or stop working altogether.

Eggshells are one of such items, and we will explain why you should never put them into your garbage disposal below.

How Does a Garbage Disposal Work?

Garbage disposals are units that go beneath your sink and collect food waste you throw into them. They then grind this waste into tiny pieces using big blunt impalers that spin. These bits of food go down the drain seamlessly, much like water does.

After the grinding, the food slowly goes into the sewers through your pipes. Likewise, it can also go into your septic tank if you have one.

Why Are Eggshells a Big No for Your Garbage Disposal?

They Can Be Harmful to the Grinder

Many people believe that eggshells are not only allowed in garbage disposals but that they are also beneficial for them. This assumption stems from the belief that eggshells can help sharpen the blades of a disposal, thus making it run more smoothly and efficiently.

However, that is not the case. As we have already mentioned, garbage disposals do not really have sharp blades. As such, they do not slice food waste into pieces, like, for example, blenders. Instead, they have blunt impalers, and they grind the food.

Regardless of how fragile they may appear, eggshells can actually harm the grinder of your garbage disposal. They have membranes that can easily wrap around the impalers and prevent them from functioning normally. The grinder can get stuck, and in many cases, you will need the help of a professional to get them up and running again.

They Can Clog Your Pipes

Certain manufacturers actually say that their disposals can grind down eggshells and that you can throw them in. Such mechanisms and strong grinders are possible, especially in disposals that cost more than the regular models most people have.

However, we still advise you not to put eggshells in your disposal, no matter how modern it is. We say that because eggshells could clog your drain and pipes. Your disposal will grind them effortlessly, but the particles will stick to each other and to your pipes.

The more eggshells you throw in, the more they will stick to each other and everything around them. Over time, they will most likely clog your drain and pipes, making it impossible for waste to go down into the sewers or septic tank. That will, in turn, disable your garbage disposal, and you will need professional help to fix everything.

Many Wastewater Associations Don’t Recommend It

A lot of wastewater associations advise people not to throw eggshells into garbage disposals. These associations are the ones that deal with sewer waste, and they say that eggshells often cause many problems for them.

Just as they can clog your small kitchen pipes, eggshells can also wreak havoc in the sewers. If they accumulate there and are not removed every few weeks, they could cause major issues for the entire town or city.

The same goes for your septic tank. If eggshells start accumulating inside of it, you will most likely have to drain it quite often. If you don’t, it will fill up relatively fast, causing your whole draining system to collapse.

What Should You Do If You Threw Eggshells Into Your Disposal?

Firstly and most importantly, don’t panic. Throwing a few eggshells in won’t cause too much damage, as long as you don’t do it again. In many cases, your disposal won’t require any repairs whatsoever.

If it appears that your disposal is stuck or the grinder isn’t working, you can try a jam-busting wrench. It is rather inexpensive and should enable you to solve the problem easily.

If the jam is too big for the wrench to handle, calling in a professional plumber should be your next step. They’ll know precisely how to deal with the issue, and your disposal, sink, and pipes will be back in action in no time.

What Should You Do With Eggshells, Then?

So far, we have established that you should not put eggshells in your garbage disposal. It is the best thing for the disposal itself, for your pipes, and for the sewers and your septic tank.

The first and obvious thing you can do about eggshells is to throw them away as you would ordinary trash. That way, you will avoid the eggshells causing any trouble for anyone, and your disposal would be safe and clean.

However, if you want to try and be creative and put the eggshells to good use, we suggest that you compost them. They are an excellent source of calcium and other nutrients that all plants need.

All you have to do is dry the eggshells for a few days. That will allow you to crush them more easily and add them to your compost. Your plants will thrive, and you will be using waste in an innovative and fun way. Most importantly, the eggshells will be as far away from your garbage disposal as possible.

As you have read, putting eggshells in a garbage disposal is not something you should do. It could damage the grinder, clog your pipes, and wreak havoc in the sewers or your septic tank.

Therefore, finding other ways to dispose of the eggshells is essential. You can either throw them away into your trash can or compost them. Either way, as long as they do not go into your disposal, you will be more than okay. 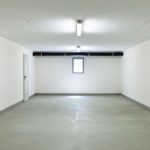 3 Ideas for Closing In Your Garage Door 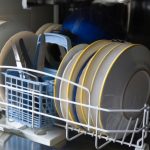 How to Get Rust Off a Dishwasher Rack