People use mothballs to protect their clothes, sleeping bags, blankets, and anything else that moth larvae and mold can damage. Since they are very effective, some people have started to use them outside to repel insects and prevent mold.

If you are thinking about doing the same, there are a couple of things you need to understand first. This article will answer all of your mothball-related questions, from how long they last outside to the dangers they might pose.

What Is the Lifespan of Mothballs When Placed Outside?

When kept outside, mothballs can last anywhere from three to six months. However, that depends on a variety of factors, such as humidity and weather conditions.

The Impact of Humidity

Generally speaking, mothballs dissolve more quickly if you keep them outside in an area with very hot weather or high humidity levels. More specifically, it will take less than three months for mothballs to dissolve and create fumes around the surroundings.

In contrast, if you place mothballs in an area with low humidity or a cold temperature, they will dissolve much more slowly. While they should last almost six months, some mothballs might not dissolve completely when placed in such an environment.

The Impact of Rain

Sublimation is a process that transforms an element from solid to gaseous state without going through the liquid state first. The process doesn’t change the essence of the element and can be reversed. You can think of dry ice, which is actually frozen CO2.

Mothballs follow the same principle. In other words, like dry ice, they won’t go through the classic conversion from solid to liquid and then gaseous. Instead, upon coming into contact with rainwater, they will turn directly into gas. That also means mothballs won’t melt but will vaporize under natural temperatures and atmospheric conditions.

Should You Put Mothballs Outside?

As previously mentioned, people place mothballs outside to drive away pests and prevent the spread of mold. However, it’s important to note that some states consider this action illegal. So you should always check your local regulations before attempting to use them outside.

Why You Should Avoid Using Mothballs Outside

When used correctly, mothballs shouldn’t pose any danger to the interior of your home. However, there are a couple of reasons why people avoid using mothballs outside.

More often than not, mothballs contain either paradichlorobenzene or naphthalene. The former is an active ingredient that can cause fatigue, dizziness, headaches, and even vomiting. The latter has similar side effects while also being highly flammable. And since they are both volatile chemicals, they can vaporize rapidly, allowing wind to carry them to a nearby fire source, potentially causing a fire.

They Are Risky for Kids’ Health

It goes without saying that kids tend to put anything in their mouths, especially while exploring their surroundings. Therefore, if you leave mothballs outside, your kids might find them and believe that they are candies. Unfortunately, when swallowed, mothballs can be extremely dangerous to your kids’ health.

They Can Be Harmful to Breathe In

After they vaporize, mothballs will persist in the air in the form of toxic fumes. If you place your mothballs too close to your property, the fumes will enter your home through the ventilation system or open windows.

They can cause breathing difficulties, as well as dizziness, nausea, and disorientation. Children and pregnant women are particularly susceptible to these and may face breathing problems for an extended period of time.

They Can Endanger the Lives of Wild Animals and Pets

Although people use mothballs to repel insects, they aren’t exactly safe. While they can get you rid of some pests, they can also put the lives of wild animals at risk. Even your pets are not safe if there are mothballs in your backyard.

But why is that the case? Simply put, animals will assume that mothballs are food and will consume them. The toxic chemicals will then harm their digestive systems, which can prove to be fatal. So, if you really decide to use mothballs outside, don’t let your pets anywhere near them.

They Can Cause Environmental Problems

Lastly, as we’ve noted, mothballs contain dangerous chemicals. During heavy rains, mothballs can get washed away by rainwater into waterways and sewers. As a result, these toxins will get into the groundwater, polluting the water and killing nearby aquatic creatures. Additionally, when you use mothballs in the same garden in which you grow veggies, your crops can absorb the chemicals through the surrounding soil.

Mothballs can last up to six months outside, depending on the environmental conditions. While cold temperatures will make them last longer, humid environments can reduce their lifespan.

However, due to the negative impact they have on the environment, many states forbid the outside usage of mothballs. So, while you might be tempted to use them against pests, you should find safer alternatives. 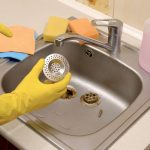 How to Clean a Kitchen Sink Strainer: A Quick Guide 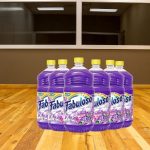 Can You Use Fabuloso on Wood Floors?