The easiest way to bring some life and character into your room is to hang pictures, clocks, or other decorations. However, it’s not as simple as choosing a spot and putting your favorite painting there. You need to make sure that your wall can handle it.

That’s especially true if you are planning to use nails in hollow drywall. You don’t want to have to deal with a giant hole in the wall, so here’s what you should know before you start decorating.

If your home was built after the 1950s, chances are that the interior walls are made of drywall. But what exactly is drywall, and why is it such a popular choice? And how does it compare to traditional plaster walls that were used for thousands of years?

When it comes to its composition, drywall doesn’t differ that much from regular plaster. The main ingredient in both is gypsum, which is mixed with water and hardens when it dries. However, these two materials are applied in completely different ways.

Before you apply plaster, you need to secure lath to the wall framing. Lath is sort of a foundation for the plaster — it gives it something to hold on to. Then, you mix the plaster compound with water and apply it wet on the lath. Usually, you’ll need three coats of plaster to finish the job — and each has to dry before you put on a new one.

Drywall is much easier to use — it comes in the form of boards that are cut to fit the wall’s shape. Then, all you have to do is secure them to the framing of the house. After that, you put corner beads in the corners, tape over the joints with paper or fiberglass mesh, and add some joint compound to secure it. And that’s it — now it’s ready for painting.

Drywall took the world by storm precisely because it’s so easy to install. Still, if you need more help with that, here is a step-by-step video tutorial.

Is It Safe to Hang Objects on Drywall?

As we’ve mentioned, it’s quite easy to hang paintings, pictures, lamps, or anything else on drywall. On the other hand, this material is quite brittle and nowhere near as good at holding weight as plaster, wood, or brick. In fact, if you’re not careful about what you’re hanging, you can quickly end up with damaged drywall and broken picture frames.

Typically, to hang pictures and similar objects, you’ll use thin nails that you drive into the wall at a 45-degree upward angle for additional support. However, even the strongest of these nails can’t hold more than a few pounds if you put them into hollow drywall. At best, you can expect to hang objects weighing between five and ten pounds, but even those won’t hold for a long time.

So instead of driving thin nails into drywall, look for wall studs and hang your decor there. Wall studs are vertical pieces of wood that stand 16 to 25 inches apart behind drywall. They are a part of the framing and provide support to the walls. Unlike drywall, wall studs aren’t hollow, so they can bear more weight — up to 20 pounds.

To find wall studs, you can use a stud finding device that quickly and accurately detects wood beams. But if you don’t have one, don’t worry — you can just as quickly locate them by knocking on the wall. Listen to the sounds your knocks are making — they will sound hollow on the drywall, but solid once you hit the stud.

So what can you hang on a nail driven into a wall stud? Well, things like small or medium picture frames, nightlights, or a little plant holder will hold on just fine. But don’t hang anything larger or heavier than that — you’ll be putting your wall at risk.

If you’re planning to hang something heavier than 20 pounds, nails may not be sufficient. In that case, it’s best to choose a stronger alternative — and here are a few you might consider:

Screws are far stronger than nails — when you drive them into a stud, they can hold up to 100 pounds. That’s perfect for hanging shelves and cupboards, as long as their content isn’t too heavy. It’s best to choose #4 screws or larger and drive them about one inch into the wall stud.

If you can’t drive a screw into a stud, but still want to hang heavy objects, drywall anchors are your best bet. These anchors are used together with the screws — first, you drive them into the wall, and then put the screw in. They strengthen the screw’s grip on the drywall, lending it additional holding power. Depending on the type of anchor you use, they can hold between 5 and 75 pounds!

Strongest out of all options, metal toggle bolts can hold up to 100 pounds on drywall. They are also an excellent choice if you want to hang something from the ceiling — but only if it doesn’t weigh more than 15 pounds. Of course, that’s due to the gravitational pull, which reduces the holding power.

Drywall may be brittle, but it can hold all sorts of things if you figure out how to hang them properly. Remember to take advantage of wall studs whenever you can — that way, even a simple tool such as a nail can hold heavy objects. If that’s not enough, though, you can always buy additional equipment! 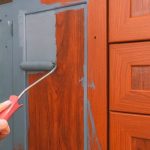 How Long Should Painted Cabinets Cure? 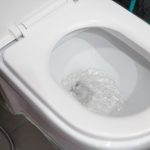 Why Does My Toilet Gurgle When Flushed? (10 Potential Reasons)

How to Tighten Garbage Disposal Blades