The sight of tape residue on shiny metal surfaces is a highly unattractive one that, more often than not, leaves little to be desired. The good news, however, is that removing adhesives from metallic surfaces isn’t such a tall order. So, how can you remove tape residue from metal?

If that tape residue has been bothering you, read on! In this article, we’ll take a closer look at some proven ways on how to remove tape residue from metal.

1. Scrape Off the Adhesive

If you’re dealing with minimal duct tape residue, then you can easily remove it using the scraping off method. The good news is you can eliminate the gunk by using different materials from credit cards to a razor blade and even a set of putty knives.

These particular putty knives are high-quality and have ergonomic handles, so you won’t worry about your comfort even if you have to keep scraping off for a while.

When using the scraping off technique, it’s highly advisable to work in a coordinated pattern. For instance, you can start from the left side of the metal, moving towards the right side. The idea is to work on one area at a time and not scrape off the entire surface through long, inaccurate movements.

The trick is to observe a similar pattern when removing the residue. When using a credit card to scrape off tape residue, you can apply as much force as you can until you remove a significant amount.

However, when using items like knives and razor blades, it’s crucial to avoid applying too much pressure as you can end up ruining the metallic surface with scratches.

Another way to remove stubborn goo is by dampening it with warm water. Using warm water will help soften the tape residue, making it a lot easier to remove from the metallic surface. Once you’ve dampened the surface, take a sponge or clean microfiber cloth and scrub with firm, consistent strokes.

In case the stubborn tape residue doesn’t come off after soaking the metal in warm water, you can try adding two to three drops of dishwashing liquid or hand soap to break down the bonds further.

When soaking the surface in soapy water, it’s advisable to cover it with a wet rag or sponge for, say, 10-30 minutes until the residue bonds weaken completely. After giving the residue enough time to soak, the next step will be to clean the surface using a soft dry cloth.

You can also use a putty knife to remove the stubborn residue that remains after soaking the surface.

3. Dissolve the Residue in Alcohol

Alcohol is a tricky solvent to use, especially on painted surfaces. Due to this, conducting a metal patch test before covering the surface with alcohol is highly recommended. Once you conclude that the alcohol is safe for use, you can apply it in small portions as you target the affected areas.

Give the alcohol enough time, preferably five to seven minutes, to work and evaporate before you start cleaning up the surface.

After three or so minutes pass, the bonds will start to weaken, which should make it easy for you to clean up the residue with a dry cloth or hard substance like a putty knife. If dealing with stubborn tape residue, you can add several drops of alcohol or soak the metallic surface in an alcohol-soaked cloth.

You can also rely on water and oil-displacing lubricants when looking to remove tape residue. WD-40 will serve you well, especially if you spray a generous amount on the metallic surface. Ensure you put on a safety glove before spraying the WD40 lubricant on your metallic surface.

Give the WD40 around five to ten minutes to weaken the bonds of the tape residue. You can then proceed to remove the tape residue. Smoothing away the tape residue with your gloved hand can work if its bonds aren’t too strong. Alternatively, you can scratch the residue using a strong surface like a razor or a putty knife.

A hairdryer can help you make significant strides in your mission to remove tape residue from metallic surfaces. All you’ll need to do is choose a high enough setting (preferably the highest) and point the dryer towards the tape residue, blowing repeatedly until the hot air works on the surface.

For best outcomes when using a hairdryer, it’s best to work on small sections at a time. Hit the tape residue with as many hot air blasts as possible, focusing on one area before moving to the next. The tape residue should be a lot easier to wipe off once you’re done administering the hot air blasts.

Tips to Keep in Mind When Removing Tape Residue From Metal

Examine the Depth of the Problem

Before you start removing tape residue from metal, examining the surface to determine the problem at hand is highly recommended. A proper examination will allow you to know which techniques to use, which can save you both time and money.

For excessively stubborn tape residue, it’s best to start with solvents that can get the job done a lot easier. Scratching stubborn stains with a credit card or a putty knife might end up making the task harder. As a result, you should always examine the surface to determine the best approach to undertake.

If you’re going to be working with corrosive solvents like WD40, then it’s best to gear up accordingly. As a rule, you shouldn’t work with any potentially corrosive solvents without putting on appropriate safety gear. Additionally, you should also read usage instructions when using solvents that you know little about.

For best outcomes, you should always remove tape residue or any stains sectionally. Working in sections allows you to focus on one area at a time, which goes a long way in improving the outcomes of your DIY stain removal project.

If spraying solvents, focus on a specific section before moving on to the next. The same applies when using a hairdryer to weaken bonds. Focusing on one area allows you to do a thorough job and work systematically compared to working without any order whatsoever.

You’ll have to do more physical work if you don’t give solvents enough time to work. As a good rule of thumb, you should always give solvents a couple of minutes to weaken tape residue bonds. Failure to do so translates to more energy on your side, which can be overwhelming when dealing with extremely large surfaces.

Therefore, be sure to check the user manual to know the right amount of time to soak your metallic surface. You’ll have a much easier time removing tape residue after allowing the metal enough time to soak in solvents like WD40 or alcohol.

You may also like: 8 Easy Ways to Remove Double-Sided Tape From Walls

If you’re dealing with light tape residue, scraping it off with a credit card or sharp utility knife can get the job done.

But for stubborn tape residue, you’ll need to bring in the big guns and use solvents to weaken the bonds. Solvents like alcohol can work well, but you might need to use WD40 if the tape residue is proving too hard to remove.

Whichever option you prefer, remember to put on protective gear if you’ll be dealing with corrosive solvents. You should also give solvents enough time to work before wiping off the tape residue. 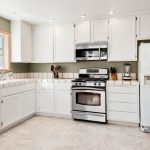 Is It Safe to Put a Microwave Above a Gas Stove?

How to Thin Rust-Oleum Paint for Spraying