Putting potato peels in the garbage disposal seems straightforward enough. But does that mean it’s the right thing to do?

You can put potato peels in the garbage disposal, but it’s not recommended. Potato peels have a high starch content, which turns into a sticky paste when combined with water. The paste can cling to the blades and sides of your garbage disposal, eventually clogging the unit.

What Happens if You Put Potato Peels in the Garbage Disposal?

How to Remove Potato Peels and Unclog Your Garbage Disposal

Fortunately, most garbage disposal clogging issues don’t require professional help. You can usually fix the problem using tools you already have at home.

Here are general steps to unclog a garbage disposal:

If the clogging issue is a little more serious, do the following:

As mentioned earlier, potato peel paste doesn’t only impact your garbage disposal. It can also clog your pipes. Fortunately, there are a few simple solutions to this problem.

First, make sure you have baking soda and vinegar on hand. Then, take the following steps:

Believe it or not, soft drinks can be the solution to your garbage disposal clogging issue. Aside from being sweet (albeit unhealthy) refreshments for scorching hot days, cola drinks contain ingredients that are more than a little handy for dislodging pesky potato peels.

For example, beverages like Coke and RC Cola have phosphoric acid, which increases the tartness in cola drinks. Likewise, Pepsi and most citrus-flavored sodas have citric acid that works pretty much the same way as phosphoric acid. However, phosphoric acid works better for treating clogs.

To unclog your garbage disposal and pipes using soft drinks, follow these steps:

Other Ways to Unclog Garbage Disposals and Pipes

Most hardware stores stock a wide variety of unclogging chemicals. However, many of them contain harsh chemicals that can damage your garbage disposal system if you keep using them over the long term.

Instead, use mechanical solutions to unclog garbage disposals like:

Also, it’s best to consult your owner’s manual or your garbage disposal manufacturer’s website. Whichever one you choose, it should have information on how to deal with clogging issues.

How to (Re)use Potato Peels

If you can’t throw your potato peels into the garbage disposal, what else are you supposed to do with them? Luckily, you don’t have to leave them to rot on your kitchen counter.

Make a Snack Out of Them

According to some nutritionists, potato peels contain more nutrients than the potato it covers. You can create a tasty snack by roasting your potato skins for 10 to 15 minutes in a 400 °F (204 °C) oven after sprinkling them with olive oil and your favorite seasoning. Don’t forget to turn them about 5 to 7 minutes into roasting to cook them evenly.

Bring new life to an old pan by boiling a handful or two of potato peelings in the old pan for about five minutes. The starch in the peels binds to any hidden dirt and grime in the pan, giving you a cleaner surface for cooking your favorite dishes.

Use Them for Home Remedies

Some people swear by an old folk remedy for removing warts using potato peels. All you have to do is place a potato peel on the wart and cover it with a bandage before bed. Assuming there’s truth to the folk remedy, the wart should be gone by morning.

Other Uses for Potato Peels

Some people like to compost potato peels. Others use them to feed farm animals.

But if your potato peels accumulate in the garbage disposal over time, they’ll eventually clog the system. Clearing clogs in the disposal unit and pipes can be time-consuming and potentially expensive — unless you try the tips I’ve laid out in this article.

Related: Can You Put Eggshells in the Garbage Disposal? 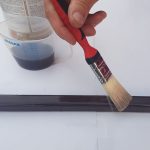 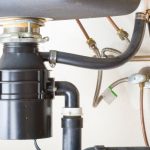 How to Tighten Garbage Disposal Blades