Drano is commonly used to unlock blockages in drains and sinks in your home. The company claims that its products don’t cause harm to pipes for plumbing; however, some people have made contradictory claims. So does Drano damage your pipes, or is it safe to use in your home?

Drano is bad for your pipes because it contains potent chemicals that break down the blockages in your pipes. It also causes harm to plastic and metal pipes. Regular use of Drano will break down your pipes, leading to leaks and the need for expensive repairs and replacements.

Keep reading to learn more about how Drano affects the pipes in your home. I’ll explore how Drano harms pipes and discuss alternatives you can use to clear blockages in your drains and sinks without causing any harm.

Most homes have plastic pipes underneath sinks and drains. Plastic pipes are fantastic as they’re affordable and easy to shape. These pipes are also lightweight. However, plastics are prone to corrosion, especially when harsh chemicals are present.

Drano eats plastic pipes. The harsh chemicals in Drano cause the plastic to corrode, leading to holes and cracks appearing in plastic pipes. However, this typically happens over time, and using Drano on your pipes once likely won’t cause them to burst.

If you’ve used Drano to clear a blockage in your sink or drain, don’t add any water to the mixture as this will increase the risk of damages. It would help if you didn’t use the drain or sink after Drano poured down for at least 24 hours. However, it’s best to avoid using Drano in the first place.

Drano contains a chemical called lye. Lye is what causes the organic material to break down in the blockage. However, Drano also contains aluminum which reacts to producing high temperatures when combined with lye. This combination also corrodes the pulse while producing near booking temperature heat.

Frank intentionally included these chemicals to facilitate a quick reaction in the poor that clears the way. However, the result of this reaction can severely damage your pipes, resulting in costly damages.

Drano will also eat through metal pipes over time. The chemicals in Drano are designed to dissolve tough blockages, which they do well. However, the Drano will also likely dissolve through anything else, including the pipes. Therefore it’s best to avoid using Drano on plastic or metal pipes.

By now, you should already be well aware that you shouldn’t use Drano to clear blockages in your plastic or metal pipes. However, not all plumbing is made from plastic and metal. Toilets are typically made of porcelain, so how does porcelain fare against Drano?

You can’t use Drano in a toilet. Drano takes a long time to break through blockages in toilets. While the Drano breaks through the blockage, it produces heat. This heat can cause the plastic piping in the back of the toilet to melt and the porcelain to crack, resulting in costly damages.

Using Drano in a toilet is a terrible idea. Not only will the Drano eat through the pipes leading away from your toilet, but it can also cause the porcelain to heat up and expand quickly, causing it to crack. Your bathroom could quickly flood with some unpleasant and unsanitary water if this happens.

Using Drano to clear blockages in your toilet will undoubtedly result in the need for expensive repairs, mainly if the Drano is used more than once on the toilet. A crack in the toilet or a burst pipe could lead to thousands of dollars in bathroom repairs and water damage repairs. Even if you have a comprehensive home insurance policy, an occurrence like this will likely lead to a bug premium jump.

Using Drano to fix black ages is pretty much an all-around bad idea. Drano harms metal and plastic piles by corrupting them with harsh chemicals, and it causes toilets to crack. So what can you use as an alternative to Drano that won’t cause any damages to your pipes or toilets?

You can use a mixture of boiling water, baking soda, and vinegar instead of Drano. The acidic vinegar and the basic baking soda interact, producing bubbles. These bubbles cause pressure to build up within the pipe, dislodge blockages and clear the way.

The mixture of baking soda and vinegar isn’t corrosive. That means the solution won’t cause any harm or damages to your metal, plastic, or porcelain pipes. You can also make this mixture yourself at home using everyday household items for a low cost.

The boiling water is included in the mixture to help melt and dissolve any blockages. Build-ups of fat or grease often cause blockages in kitchen sinks. Fat and grease will turn into a liquid when exposed to high temperatures. Therefore pouring hot water into the sink will help dislodge the blockages.

You can also use a plunger instead of Drano. Plungers for a seal around a pipe that, when the plunger is used, pulls and pushes the blockage until it breaks apart. Plungers are practical tools that are inexpensive, easy to use, and suitable for sinks and toilets. However, forceful plunging or plunging on a severe blockage can cause damage to pipes, so plunging isn’t always the best solution.

Finally, you can hire an expert to clear any severe blockages in your pipes. A professional plumber will likely use specialized equipment like a drain snake to clear the way. Drain snakes are long, skinny poles that can be manipulated to navigate pipes to clear blockages.

Hiring a professional plumber will ensure that your blockages are clear without harming the pipes. However, hiring a plumber is expensive, and you’ll likely want to avoid doing this when possible.

Will Bleach Unclog the Pipes?

Bleach is a powerful cleaning tool full of harsh chemicals that strip away marks and kill harmful bacteria. This chemical also appears to eat through things like lime and stains, and it usually has a corrosive warning on the bottle. So can bleach be used to break down blockages in your pipes?

Bleach won’t unclog a drain. The harsh chemicals in bleach kill bacteria and remove odors. However, bleach isn’t capable of eating through hair, soap, or other build-ups commonly found in blockages. Therefore your bleach won’t be capable of unclogging a drain.

As bleach is highly effective at sanitizing and killing bacteria, bleach should be used to clean pipes, especially in kitchens and bathrooms. The bleach will eliminate the harmful and foul-smelling bacteria from your pipes. After pouring bleach down the drain, it’s important to run water afterward to ensure that the blech washes through the pipes, cleaning them thoroughly.

Some people don’t like to use bleach as it leaves a bad smell and is not an eco-friendly option. If you’re worried about using bleach for your drain, opt for alternatives that are kinder to the environment.

The Green Gobbler is a good option. It’s non-corrosive and can be used safely for your drains.

Drano contains chemicals that can severely damage your pipes. The lye in Drano eats through organic matter and pipes. Then the aluminum also reacts with lye producing heat. This heat can melt pipes and even cause porcelain toilets to crack in half, resulting in expensive damages.

You can avoid this hassle by making your own homemade drain blockade remover. All that you need to do is pour some boiling water down the blocked drain, followed by a mixture of baking soda and vinegar. This clears blockages without damaging the pipes.

Related: Can You Leave Drano Overnight? 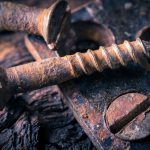 How to Remove Rust From Screws: A Step-by-Step Guide 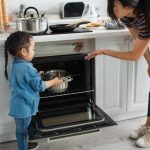 Can Stainless Steel Go in the Oven?